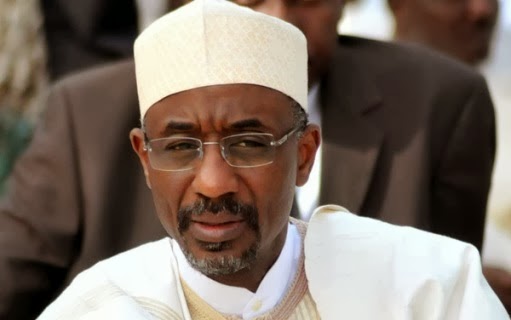 In the application filed at a Federal High Court sitting in Abuja late on Monday, Sanusi is challenging his suspension from office; and he has implored the court to, among others, restrain the president - alongside Attorney General of the Federation (AGF) and the Inspector General of Police (IGP) - from giving effect to his suspension, pending the determination of his lawsuit.


He is also seeking an order of interlocutory injunction restraining the defendants from obstructing, disturbing, stopping or preventing him in any manner, from performing the functions of his office and enjoying in full, the statutory powers and privileges attached to the office of the governor of the CBN.

Making a case for the reasons why the court should grant the prayers in his interlocutory application, he said the president’s unlawful interference with the management and administration of the CBN can only be left unaddressed at the expense of the country’s economy. Granting his application, he argued, will encourage parties to maintain the status quo until the determination of the substantive case.

In a supporting affidavit, Sanusi maintained that his suspension is the consequence of his outcry over the $20bn in crude oil sales that was unremitted by the Nigeria National Petroleum Corporation (NNPC). He explained that while performing his duties as Governor of CBN, he discovered certain discrepancies in respect of amounts repatriated to the federation account from the proceed of crude oil sales between the period of January 2012 and July 2013.

He said he expressed concerns about the said discrepancies and went ahead to notify the National Assembly, considering its huge effect on revenue of the federation and the national economy. His suspension, he insisted, is aimed at punishing him for the disclosures.

Sanusi stated clearly that he was challenging the president’s power to suspend him from office, especially as the Senate was not approached to ratify the decision.

“I have been informed, and I verily believe the information given to me by Senator Bukola Saraki to be true and correct that the Senate did not give the president any support for my purported suspension and removal from office as Governor of the Central Bank of Nigeria”, a part of the document read.
He described his suspension as a contravention of provisions of the Central Bank of Nigeria Act relating to the appointment and removal of the CBN Governor. He therefore branded the act an unlawful interference in the administration and management of the apex bank, which is illegal, null and void.

President Goodluck Jonathan suspended Sanusi Lamido as CBN Governor on 20th February 2014, claiming reliance on a report of the Financial Reporting Council of Nigeria (FRCN) that indicted the governor of “financial recklessness and misconduct”.

But the widespread belief is that Sanusi’s suspension was triggered by his well-documented outspokenness, particularly his recent revelation of NNPC’s failure to remit $20bn in crude oil sales to the federation account.

During his presidential media chat, Jonathan claimed that Sanusi remains the governor of CBN, yet the president nominated both an Acting Governor and a substantive replacement for Sanusi exactly on the day his suspension was announced