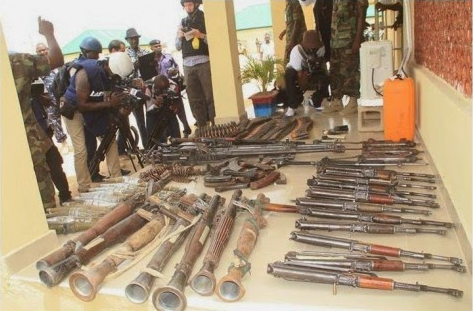 A shocking revelation has been made by concerned citizens of Borno and Yobe states.

According to Nigerian Eye:


The elders, who spoke at a press conference in Abuja on Monday, also asked the government to provide answer to the attack on the Maiduguri Air Force Base by insurgents, who reportedly de-mobilised and set ablaze aircrafts and other military facilities even with the existing state of emergency and curfew in the town.

Speaking under the aegis of Borno, Yobe People’s Forum, the elders also asked those in authorities to tell Nigerians those that authorised the withdrawal of security personnel from the Federal Government College, Buni Yadi, few hours before the recent attack that claimed the lives of 59 innocent children.

A former Chief of Air Staff, Air Vice Marshall Al-amin Dagash (retd.), spoke on behalf of the forum at the press conference.


Dagash was flanked at the press conference by a former Minister of Finance, Mallam Adamu Ciroma; a former Secretary to Government of the Federation, Ambassador Babagana Kingibe; an elder statesman, Shetima Mustapha and other political leaders from the two states.

He said, “Are the authorities unaware of helicopters dropping arms and ammunition, food and medical supplies to areas well known to be strong holds of the insurgents?

“How were the insurgents able to attack the Maiduguri Air-Force Base and demobilise as well as burn planes and other military installations despite existing state of emergency and curfew in the town? How could 20 to 30 Toyota Hilux vehicles move in a convoy freely with subsisting curfew and still go undetected?

“How did a little band of rag-tag misguided youths metamorphose into a well-kitted, well-armed killing machine moving freely in convoy of vehicles and supported by helicopters.

“How did the Shilka Tank, a multipurpose self propelled anti-aircraft artillery weapon, positioned to secure Giwa Barracks, fail to function resulting in heavy loss of lives of both civilian and military as widely reported in the media? Are we dealing with fifth columnists in this crisis?”

He wondered how the insurgents were able to kill Gen. Mohammed Shuwa, whom he described as a civil war hero, despite the presence of a military detachment in front of his home.

The retired Air Force chief asked the Federal Government to unmask those behind the “online media campaigns of calumny stirring ethno-religious intolerance in the country.”

He also asked the Federal Government not to extend the state of emergency declared in the three North-East states, saying that the action had failed to achieve its purpose.

The state of emergency, originally declared in May last year and renewed for another six months in November, expire on April 19, 2014.

Dagash said that about 18 communities had been attacked by insurgents in the last one month with heavy civilian casualties, adding that rather than abate, the insurgency had continued to escalate and daring.

He said, “The continuous bloodletting has led to the loss of over 17,000 lives. Official statistics released by the National Emergency Management Agency revealed that over three million people have been displaced by the insurgency and terrorist attacks in the affected states of Borno, Yobe and Adamawa in the first three months of 2014 alone.

''Most of the victims are women, children and the elderly. These developments underscore the urgent need for the government, the international community, as well as all Nigerians to arrest the brewing humanitarian crises in the area.''