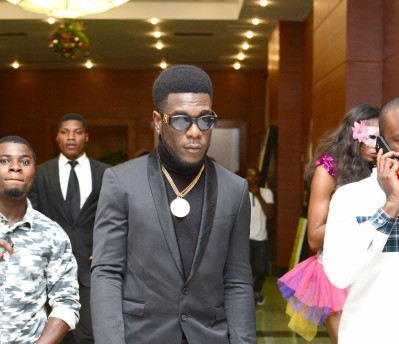 Burna Boy made an announcement via his twitter account some days ago that his mother is no longer his manager and all bookings be directed to his personal bookings mail. A certain blogger took to her blog and wrote “I just wonder if there is no better way he could have done this, did he have to do this on twitter considering it is his mother, could he not have simply said my mum has stepped down because she feels this is as far as she can go or any other excuse? Because to me it seems as if he is publicly sacking his mother” she wrote.

A fan said why does she have to misinterpret everything, then Burna boy after seeing this post attacked the blogger on twitter and said “I did not fire my mum I made an announcement because if I didn't people would still be bothering her with my bookings” just when the blogger replied saying thank God he has cleared the air and then congratulated him on his new video, the pissed Burna Boy said;

“I hope God punishes you for trying to make something outta nothing. You desperate animal” another fan of his advised him not to be angry, that the blogger is only trying to push her blog.