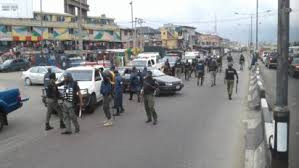 
Attention of the Lagos State Police Command has been drawn to the news making the rounds on the internet to the effect that a group of boys popularly called the 'Area boys' are attacking Igbo traders at Oshodi, preventing them from opening their shops.
The Command wishes to debunk the rumour in its entirety as nothing could be further from the truth.
Although the Command received ditress calls from concerned Nigerians whose apprehensions were understandably heightened by disturbing rumours emanating from some social media platforms, the Command swiftly and massively deployed its personnel drawn from various units to Oshodi and environs to assuage the feelings of residents and further assure Lagosians of its readiness to decisively deal with any person or group of persons who attempts to breach the public peace.
The Commisioner of Police, Lagos State Police Command, commended Lagosians for conducting themselves in a peaceful and orderly manner during the last Saturday Presidential and National Assembly Elections. The Police with support of other Sister security agencies worked round the clock to ensure that the process was generally peaceful. In order to sustain the peaceful atmosphere, the Command will maintain a high level of Police presence in all parts of the state with emphasis on crime prone areas.
Those celebrating should do that with modesty while those unhappy with the results have the privilege of adhering with laid down procedures of addressing their grievances as provided by the Electoral Act in the Tribunal. The Command has made adequate arrangements to secure the venues of the Election Tribunals in the State.
The Command  however, warns criminally minded people and disgruntled elements to steer clear of the state or be prepared to contend with security forces in the state