Alleged N2.5bn NBC fraud: Court orders Kawu’s arraignment by ICPC even if 'it's on stretcher' 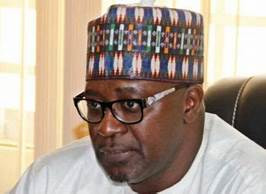 A Federal High Court, Abuja, has ordered the Director-General of the National Broadcasting Commission (NBC), Ishaq Moddibo Kawu, to appear before it to answer allegations concerning his involvement in the mismanagement of N2.5 billion seed grant for the Digital Switch-Over programme of the federal government, even if it is on a stretcher.
Kawu, who was to be arraigned alongside Lucky Omoluwa and Dipo Onifade, Chairman of Pinnacle Communications Limited and the Chief Operating Officer respectively, over their alleged complicity in the mismanagement of the N2.5 billion seed grant, failed to appear before Justice F. O. Giwa, claiming to be on admission at the University of Ilorin Teaching Hospital, Ilorin, Kwara State.
His counsel, A. U. Mustapha, presented a medical certificate to the court to back the claim, adding that Kawu, who had had a major surgery 10 years ago had to check into hospital due to issues arising from the operation. He said:

“He is on admission at the hospital at the moment. He had a major surgery 10 years ago and I have a medical report from the University of Ilorin showing why he cannot be here. I ask for adjournment pending when he will be well enough to attend court”
Counsel to ICPC, Henry Emore, did not oppose the plea for adjournment but however asked the court to note the maximum number of times adjournment can be granted based on the Administration of Criminal Justice Act, 2015.
Justice Giwa, in her ruling adjourned the matter to 17th April, 2019 for arraignment. She also told the defense counsel to produce Kawu on the said date even if it means bringing him to the court on a stretcher. She said,
“You must ensure that your client is in court even if he has to be on a stretcher; I am agreeing to this adjournment taking into cognizance his health issues, but the trial needs to go on, you must ensure he is in court next time.”
The judge further ordered ICPC to investigate the medical certificate and report back to the court.Kawu, Omoluwa and Onifade are facing a 12-count charge bordering on abuse of office, money laundering and misleading a public officer with the intent to defraud the federal government.
The Commission accused Kawu of facilitating the payment of N2.5 billion federal government Digital Switch-Over funds to his friends and associates which was allegedly converted into personal use in contravention of Section 19 of the Corrupt Practices and Other Related Offences Act, 2000.