Photos: Hungry Crocodile swallowed a Tortoise and its tough shell for Lunch 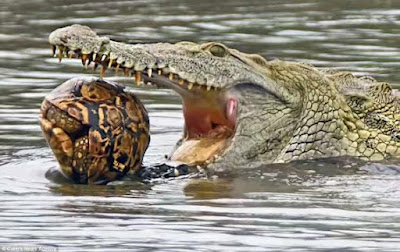 Faced with huge teeth and gaping jaws, one tortoise played it smart and retreated
into the sanctuary of its armour-like shell as hungry crocs fought over it. Its tactic
wasn't the smartest after all as one croc battled the others away and swallowed
the tortoise whole.

The images were taken by part time photographer Lisl Moolman, 42, at South
Africa's Krueger National Park while on a family holiday.

She said: 'I was sitting at the dam, sightseeing and watching animals as they came to drink. As is the norm, crocodiles sunbathe at this dam. Everything was quiet and tranquil, until another visitor attracted my attention showing me that a crocodile just caught a leopard tortoise and was moving into the water at great speed.

She added: 'I saw a crocodile at the water's edge moving into the water with high speed, a leopard tortoise clamped tightly between its jaws. The tortoise shell is notoriously quite hard to break. It kept the tortoise in its jaws, while some more crocodiles gathered around it. It wasn't long before they started fighting over it, and the tortoise disappeared into the depths of the water after being dropped.
'After a couple of minutes, it drifted to the surface, where a crocodile guarded it until swimming away after about half an hour.'

The croc may find that shell hard to stomach. 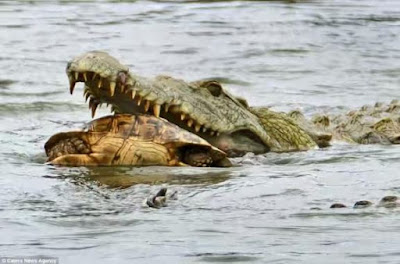 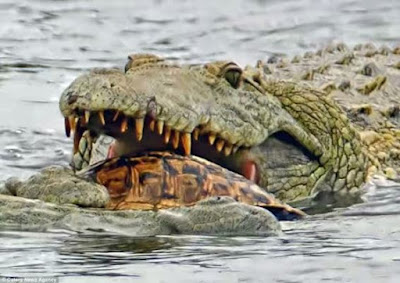 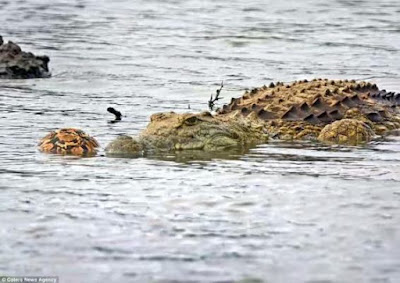 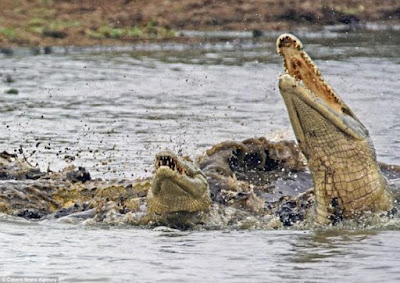