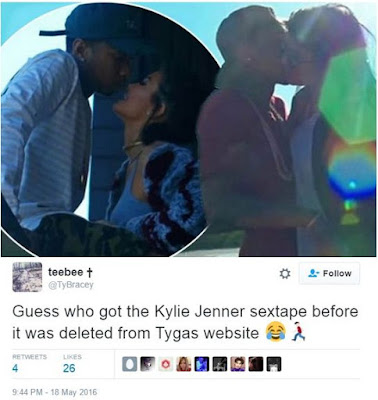 According UK Daily Mail, Tyga leaked a sex tape with Kylie Jenner on his website
earlier today. They claim the tape was taken down after it was up for about 30 minutes.
Read their report below


A sex tape featuring Kylie Jenner and now ex-boyfriend Tyga has reportedly surfaced. Kylie, 18, is said to be ‘freaked out’ that an intimate video of the pair will get into the wrong hands after it reportedly appeared on the 26-year-old rapper’s official website, Tygasworld.com, for approximately 30 minutes before being taken down.


A source said: “Tyga will not sign off on releasing it to the masses, but Kylie is scared that a sex tape could get in the wrong person’s hands with one of his buddies and they could put it online to embarrass her.”

One Twitter user appears to have secured the footage before it was taken down, writing on the social media site: “Guess who got the Kylie Jenner sex tape before it was deleted from Tyga’s website.”

Tyga is thought to have been rubbed up the wrong way by Kylie's mum Kris Jenner, who reportedly precipitated the split because the family has made room for Tyga's ex-Blac Chyna, who's pregnant with Rob Kardashian's baby.

Kylie has stayed very quiet on the split, even though Tyga has insisted that their split was amicable and that he will 'always love her.'