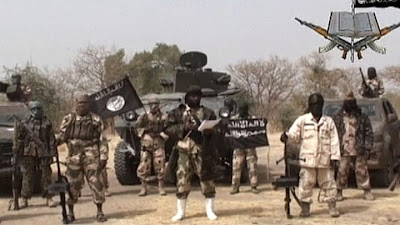 You remember Dr. Stephen Davis? He is a prominent Australian cleric, who is also known as a "hostage negotiator". Davis had previously helped the Federal Government in reaching an agreement with the Niger Delta militants in 2004, he was also recruited by Jonathan initially to assist in rescuing the missing Chibok School Girls.
Now, Davis has warned that Boko Haram may establish links with two terrible terrorist groups, Al Shabaab and the Islamic State of Iraq and Syria(ISIS), if not effectively checked now by the government.
Al Shabaab, the militant wing of the Somali Council of Islamic Court,  aligned with Al-Qaeda and took over most of Southern Somalia in the second half of 2006.   The ISIS, on the other hand, everyone has been hearing of how they are beheading Christians severely in Syria and Iraq. ISIS is an Iraqi group that stands with Al-Qaeda as the most vicious Jihad group in the world.
See pics of what ISIS is capable of doing after the cut + Read up on why the 60 Chibok girls were not released


Davis, in an interview posted on Wednesday by Radio Australia, said  that the best ways to stop Boko Haram insurgency was to block its sources of funding and tracking down its sponsors.
He identified banks and some Nigerian politicians as the major providers of funds to the insurgents.
The Australian claimed that many of the politicians sponsoring the insurgency were in the opposition, adding that it would be difficult for President Goodluck Jonathan to arrest and prosecute them.
He argued that should Jonathan   try   to order their arrest, it would be misconstrued as a political attempt to rig the 2015 elections.
Davis said,

“That makes it easier in some ways as they can be arrested, but of course the onus of proof is high and many are in opposition, so if the President moves against them, he would be accused of trying to rig the elections due early next year.

“So, I think this (insurgency) will run through to the election unabated. These politicians think that if they win power they can turn these terrorists off, but this has mutated.

“It’s no longer a case of Muslims purifying by killing off Christians. They are just killing indiscriminately, beheading, disembowelling people – men, women and children and whole villages.”

According to the negotiator, Boko Haram is growing out of the control of the politicians sponsoring it.
He warned that, as it is the trend with terrorist groups in Somalia, South Sudan and Egypt, the Boko Haram insurgents might soon link up with the ISIS and Al Shabaab.
Davis added,

“I would say it’s almost beyond the control of the political sponsors now.

“Terror groups are linking up in Somalia, southern Sudan, Egypt and we have fairly strong evidence they are talking with ISIS members.

“They will link up with ISIS and Al Shabaab and I think that what we are seeing in that region is the new homeland of radical Islam in the world.”

Davis claimed he survived months of extreme danger in trying to rescue the  over 200 abducted schoolgirls.
Davis, who returned from a four-month sojourn with rare footage of the intense fighting in the North-East,   said his life was threatened more than once, but his Australian passport saved him.

“When confronted by groups with an AK-47 in my face they’d say, ‘you are American, we have to kill you,” Davis said.

“When you say, no I’m not American, they think you are British, and say you will still die, but when I said I’m Australian, they said that’s all right.

“I have no idea why but it’s certainly been helpful.”

He however blamed the aborted rescue of the schoolgirls on sabotage.

“I made a few telephone calls to the Boko Haram commanders and they confirmed they were in possession of the girls,” Davis said.

“They told me they would be prepared to release some as a goodwill gesture towards a peace deal with the government, so I went to Nigeria on the basis of being able to secure their release,” he added.

According to him, the insurgents lived up to their promise, but the rescue was sabotaged.
He said,

“The girls were there, 60 girls. There were 20 vehicles with girls. We travelled for four-and-a-half hours to reach them, but 15 minutes before we arrived, they were kidnapped again by another group who wanted to cash in on a reward.

“The police had offered a reward of several million naira just 24 hours before we went to pick them up. I understand, from the Boko Haram commanders I spoke to, the girls eventually ended up back with them.

ISIS have been killing non-Muslims in many cities in Iraq and Syria. Their aim is to eradicate the Christian faith in the countries. There's been several executions of believers, including crucifixions and the beheadings of children. The children's heads are being erected on poles in a city park. Here's what an eyewitness, Mark Arabo, a prominent Chaldean-American businessman  told CNN,

"There is a park in Mosul where they actually beheaded children and put their heads on a stick and have them in the park. The world hasn't seen this kind of atrocity in generations" 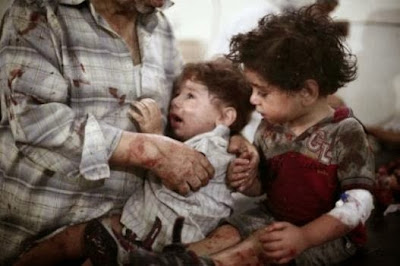 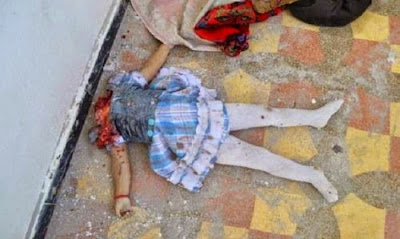 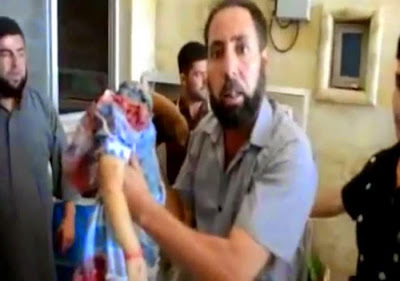 A man  holds the lifeless body of his decapitated daughter, executed by ISIS because she was of a Christian family. 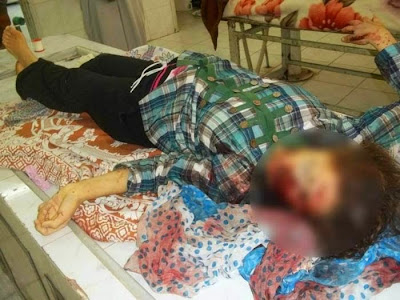 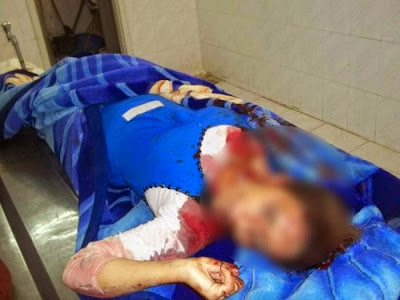 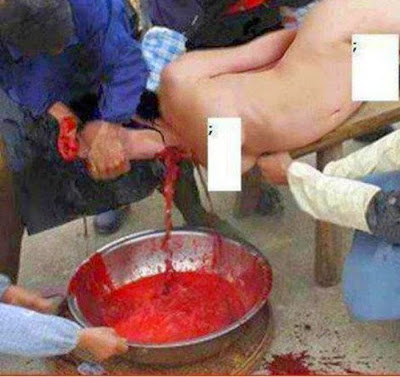 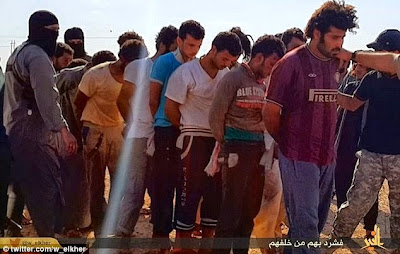 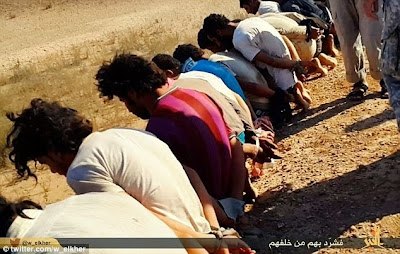 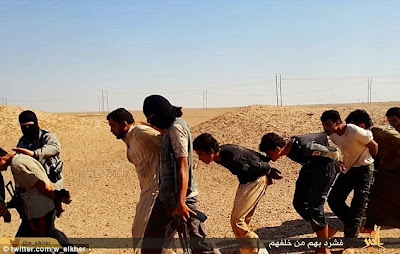 Barefooted with their hands bound behind their backs with rope, the prisoners are marched to the execution site in the desert near Deir ez Zor in Syria 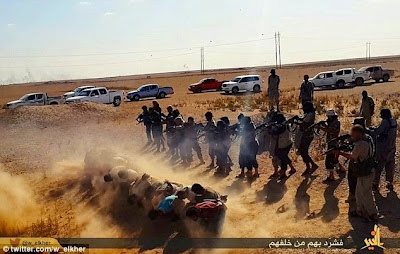 Lined up and executed, their severed heads put on display as a warning to others 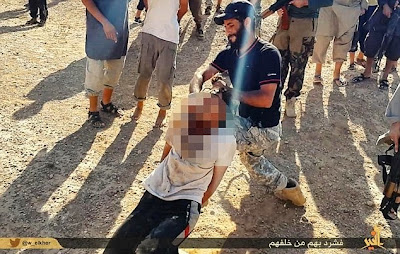 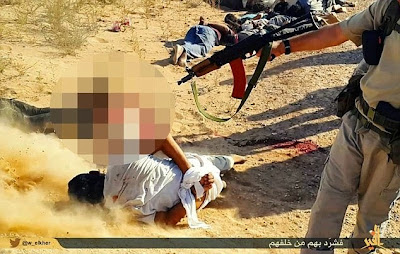 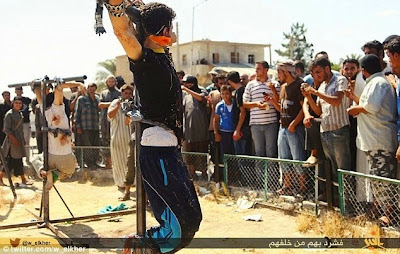 Brutal: Other captives are shot before being tied to makeshift crucifixes 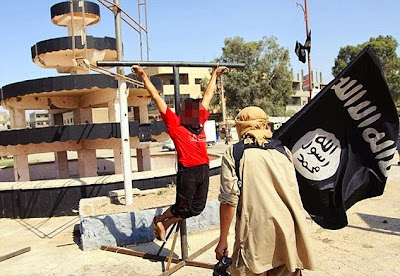 A crowd of local men watch from behind a low fence, some of them are taking photos or filming the executions with their mobile phones