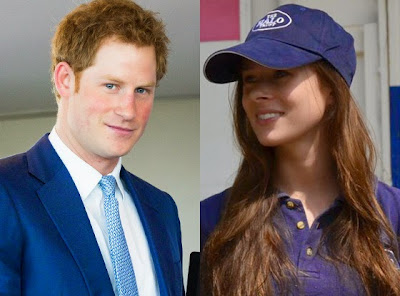 Prince Harry is currently on a romantic getaway with new girlfriend, Camilla Thurlow in St. Tropez in the South of France. The new couple have been staying at a friend's luxury villa and have barely left the premises while on vacation, a source tells E! News.

Instead of going out to clubs or restaurants, the lovebirds have been spending every minute together by the pool and out of the eyes of the prying paparazzi. Harry and Camilla first started dating about six weeks ago and have bonded over her job as a charity worker. Says the source;

"They've been talking until late into the night and having one of those magical times that you have when you first fall in love and want to find out everything you can about the other person. Harry's had no interest whatsoever in going out and just wants to focus on Camilla without any distractions."

"Camilla's the full package—she's got beauty and brains. Harry loves how she's devoted her life to charity—she's fully committed to helping other people and he sees a lot of his mother Diana's goodness in her.


"This was supposed to be Harry's last summer of fun before he turned 30 and got serious and settled down. The second he decided he'd spend July and August partying and being young, carefree and single while he still could be he was introduced to Camilla by his cousin Princess Beatrice and his crazy party plans went out of the window and all of a sudden he's acting like a contented married man. It's a great sign—it shows how mature he is now and that he realizes when he finds happiness to not let go of it and to nurture it."


Harry broke up with ex Cressida Bonas back in April, and though he hasn't been long with this new girlfriend, Harry "sees Camilla as much more than a fling," says the source.

And the feeling is mutual. Camilla is said to be head over heels in love with Harry already and has told friends that he's "sweet, sensitive and so romantic."