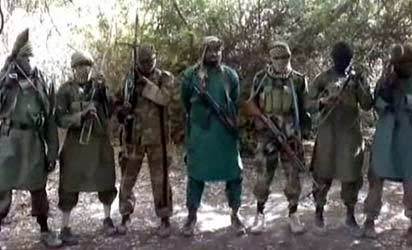 Yesterday, a Catholic Church  complained that Boko Haram members had taken over the parish church house as well as houses of Christians in Madagali, Adamawa State.

Madagali town is the headquarters of the Madagali Local Government Area and it shares border with Borno State. It is also the closest town to Gwoza, the town that Boko Haram has already annexed.

The church, in an electronic press statement by the Director, Catholic Social Communications in-charge of the Maiduguri Diocese, Rev. Fr. Gideon Obasogie, said that though the members of Boko Haram had been known not to discriminate in their attacks, it however seemed that Christians and Christian institutions had been at the receiving end of the sect’s mayhem.


“The whole town and the parish rectory have been occupied by the terrorists; so many structures and items have been vandalised. Dozens killed and a lot of church structures have been burnt down.”

“Christians in the town are really in a terribly situation; a moment of great persecution.

“Christian men are caught and beheaded; the women are forced to become Muslims and are taken as wives to the terrorists. The houses of Christians that have fled are now occupied by the insurgents.

“Their cars are used by the terrorists. Some Muslims around identify Christian homes to be occupied and the Christians in hiding were also identified and killed. Strict Sharia Law has been promulgated, as observed by a woman who luckily escaped the death zone.”


The priest said the situation had gone out of control. “


People are finding it really hard, citizens are been killed in their numbers,” he added.

He said the Catholic Church had been compelled to close down all the churches on the major road linking Borno and Adamawa states because of the acts of terrorism.