Ebola: How Infected Doctor Ran From Lagos To Port Harcourt 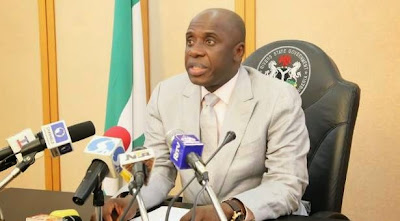 A member of staff of ECOWAS, who was on the team that received the late Patrick Sawyer in Lagos, made a trip to Port Harcourt where he checked into a hotel and met with Dr. Iyke  Enemuo. The ECOWAS official whose name was not given, was said to have had contact with Patrick.

He was placed under surveillance in Lagos but he escaped to Port Harcourt  where he checked into a hotel and contacted Enemuo for treatment.The official recovered from the ailment and returned to Lagos. Health workers were said to have tested him when he allegedly came for a clearance certificate and gave him a clean bill of health.

But the Rivers State Government said,

“About a week after his departure, Enemuo took ill and was rushed to a hospital where he presented with symptoms of fever, diarrhea and vomiting.

In the course of treatment, the managing physician became suspicious and took samples for investigation. A few days after,  Enemuo died on August 22, 2014. His body was deposited in a mortuary in Port Harcourt.

I thought they cremate them?


Enemuo’s widow, who is also a medical doctor and who cared for him during his illness, has taken ill. She is being quarantined. A few hours ago, results of the test carried out on samples taken from Dr. Enemuo came back and was positive of EVD.”

“About 100 contacts from a hotel, patients of Dr. Enemuo and patients of the hospital where   Enemuo was treated until his demise have been identified and restricted.’’

A resident of Port Harcourt, said in her Facebook post, that before he took ill on Tuesday,

“ (he) operated on a woman on Monday presumably after treating the diplomat.”

“It’s quite a calamity unfolding in Port Harcourt. Unfortunately, the city’s health facilities are not quite ready to contain Ebola at the moment, He (Enemuo) fell ill next day Tuesday and died last Friday. No one knew about the hotel angle which was a very big risk he took…an unethical thing to do.

He was ill for three days and then started vomiting blood. He was first rushed to one hospital where he was rejected and then taken to Good Heart Hospital whose owner is a Cardiologist and a consultant physician with the University of Port Harcourt Teaching Hospital . He died there.

“The doctor that died practises in East West Road, Rumuokoro…Sam Steel clinic. The wife, also a doctor, has a three-month-old baby. As it is, there may have been well over 200 contacts of this devilish diplomat who lured his young doctor friend to treat him secretly and went back to Lagos.

We have to look at the health workers in the Good Heart Hospital, Sam Steel Clinic, the members of staff of the hotel and its guests, those who travelled with the diplomat in the same vehicle(s) or aircraft from Lagos to Port Harcourt, the late doctor’s family members. The list goes on and on.”

“My own take is what is with the foolishness of people who suspect they have Ebola not wanting to subject themselves to straight testing. Don’t they know quick detection could save their lives and those of others?”

A member of the Emergency Operation Centre for Ebola in Lagos, Prof. Oyewale Tomori said,

“Initially many people who came into contact with Sawyer were not forthcoming with the truth. It was difficult to trace some contacts who did not leave any address. They could not trace the ECOWAS diplomat for days.

Surveillance is the duty of everyone. And we must follow international guidelines and regulation. If we take your temperature and say we will be back tomorrow by 8am to take another, we expect that you should cooperate, but that was not the case.

“Some even travelled, and their people were also not ready to disclose where they went. Some even denied the degree of contact that they had with Sawyer.”